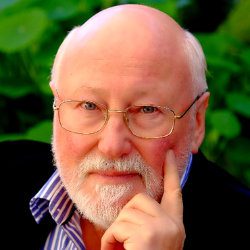 Julian Cribb is an Australian author and science communicator. He is a fellow of the Royal Society for the Arts, the Australian Academy of Technological Science (ATSE) and the Australian National University Emeritus Faculty. He is a Member (AM) of the Order of Australia (General Division)

His career includes appointments as newspaper editor, scientific editor for The Australian daily newspaper, director of national awareness for CSIRO, member of numerous scientific boards and advisory panels, and president of national professional bodies for agricultural journalism and science communication. He is a co-founder of the Council for the Human Future.

His published work includes over 9000 articles, 3000 science media releases and eight books. He has received 32 awards for journalism. His internationally-acclaimed book, The Coming Famine (2010) explored the question of how we can feed 10 billion humans this century. His book, Poisoned Planet (2014) examines the contamination of the Earth system and humanity by anthropogenic chemicals and how to prevent it. His book Surviving the 21st Century (Springer 2016) deals with the existential crisis facing humanity in our time – and what we can do about it. His latest books are Food or War (Cambridge 2019) and Earth Detox (Cambridge 2021)